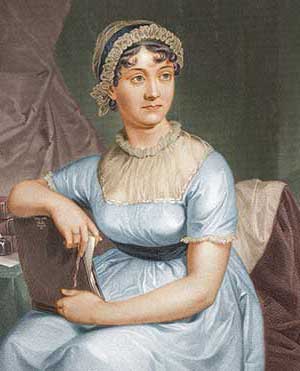 Admit that you write stories, and people will almost invariably immediately tell you what story they would write “if they only had time.”  –Or, alternatively, what story they will write just as soon as they get any time.  Apparently in every case, lack of time—not skill, talent, experience at writing, etc., etc.—is the only thing keeping them from producing a literary blockbuster.  If you can stifle your urge to inform them that writing is actually pretty hard work, they will talk all evening about their projected story, leaving you, nodding wisely from time to time, free to think about yours.

—Although you may occasionally have to deal with the “Jane Austen Problem.”

As every Jane Austen fan knows, while poor Jane was struggling to finish Emma (and I don’t care how much you love Pride and Prejudice; if you think it’s better than Emma, you’re just wrong, okay?) she received a letter from a certain Reverend James Stanier Clarke, who worked for the Prince Regent, informing her that his royal boss kept a set of all her novels in each of his residences.  He then hinted broadly—and we may assume, I think, that this was the actual point of the letter—that the prince would like it very much if she dedicated her next book to him.  Which Jane wisely did.  I don’t actually know how many residences the Prince Regent had at the time, but an Emma in each of them couldn’t have hurt the Austen bottom-line.

Jane Austen’s problem was that Rev. Clarke went on to propose that Miss Austen consider writing the story of “an English clergyman; a man”—wait for it—“like himself.”  Just like himself, apparently; because he suggested several specific episodes he wanted portrayed (“picture him burying his mother—as I did”).

On the one hand, this kind of thing is annoying.  On the other, I have no doubt Jane could have turned Rev. Clarke’s life into one hell of a good read.  The satirical “Plan of a Novel” she wrote soon after describes a heroine’s father as a clergyman who is “nobody’s Enemy but his own” –a direct quote from the importunate clergyman’s depiction of himself—and the heroine and her father as fleeing to Kamchatka (great setting, Jane!) where “the poor Father… finding his end approaching, throws himself on the Ground & after 4 or 5 hours of tender advice & parental Admonition to his miserable Child, expires in a fine burst of Literary Enthusiasm, intermingled with Invectives against Holder’s of Tythes.”

This is a book I would like to read!

It’s aggravating when someone starts telling you to write about them, but if you listen carefully, you may find much good material there.

In other words, it’s aggravating when someone starts telling you to write about them, but if you listen carefully, you may find much good material there.  A weepy clergyman’s fit of death-bed religious mania, may, if transferred to an exotic location, become very interesting; and if, as Jane Austen does, you have the parson peg out early in the story, leaving an improbably pure heroine far from home and abruptly thrown friendless on the world, it’s pure gold.  She’s beautiful!  She’s innocent!  She’s meat in a shark-tank of unscrupulous men!  Is she the plucky kind, who wises up quickly and saves herself?  (I have it on the best authority—a very pointed letter of rejection—that the “plucky” type is currently a favorite with publishers.)  Or is she–possibly after a series of adventures bordering on the pornographic, if that’s your taste—rescued by a strong yet sensitive man?  –Or, since these are modern times, a strong yet sensitive woman?   Is it contemporary?  Historical?  Which kind of clothes do you like to describe being flung wildly or fluttering romantically to the floor?  –And don’t overlook so-called “genre” possibilities, either.  Consider creating a heroine who finds her salvation in quilting, scrapbooking, or wood-craft.  The “Wood-craft fiction” publishing market, particularly, is not (yet) overcrowded.  Meanwhile, as you mentally mine and develop possible plot elements from what your fellow party-guest tells you is the book he will someday write, occasionally nod wisely as though you are paying attention.

Then at the end of the evening, do as Jane Austen did.  As you leave, regretfully admit that you “could never depict” [such a] “learned clergyman” (bookkeeper/beekeeper/sonavabitch CEO/boring biochemist/whatever) since you are “the most unlearned, uninformed female who ever dared write.”

—Substitute “male” for “female” if appropriate.