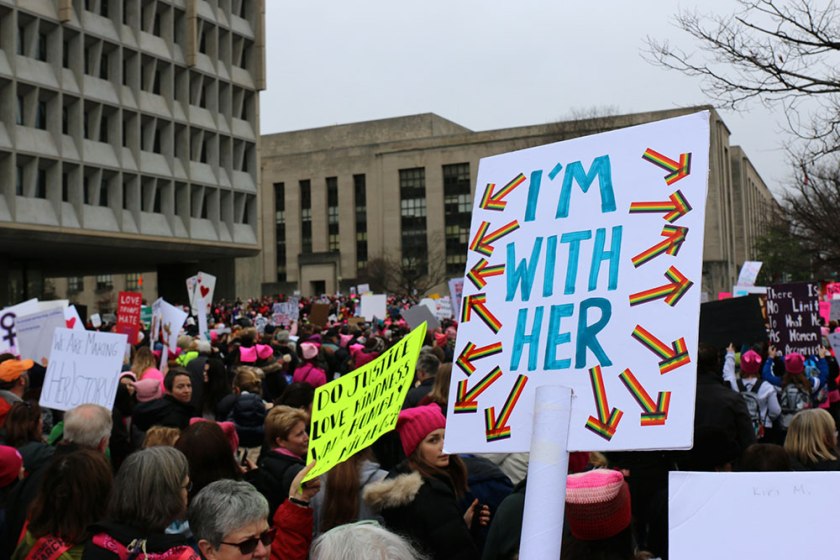 A long time ago, I used to wear a peace sign suspended from the love-beads around my neck, knew many verses to “We Shall Not Be Moved”, and kept a pair of good walking shoes handy for marching in support of civil rights, the Equal Rights Amendment, and against American involvement in foreign wars—specifically, in those days, the one in Vietnam. In the days before the internet and social media, getting together and marching was the only way people knew to counter the widely-disseminated official government position that the American people didn’t really want civil rights to be more broadly extended, or the Vietnam War to end. Thousands of people in the street singing songs and carrying signs was proof for anyone to see that yes, indeed, vast numbers of the American people certainly did want those things, and weren’t going to be stopped from saying so.

The results of our activism were somewhat mixed. The war in Vietnam finally ended and I ceremoniously threw away my peace sign; but then other wars came along. Women lost the fight for a constitutional amendment to guarantee our rights; but we resigned ourselves to the longer, harder road of securing them piecemeal and kept at it. Though we’ve made progress at it, the struggle for civil rights in general has sometimes seemed endless. But along the way, I stopped marching, because our elected officials seemed, finally, to realize that people who marched on behalf of a cause also voted for candidates who supported that cause in Washington, and that if they ignored the marchers, it would be at their peril.

Now that it appears that we’re going to be governed—not through our elected representatives—but by executive orders and fiats imposed by people whose positions are outside of our traditional system of checks and balances, and implemented immediately and preferably when no one is looking.* Many of the elective officials I counted on to be our bulwark against this kind of tyranny are, instead, either indifferent or complicit in it.

Clearly, they need to be taught the lesson again that as we march, so do we vote; so I’ve hung a new peace-sign on a chain around my neck; crocheted myself a pink pussy-hat, and got a sturdy new pair of walking shoes. I’m going out to demonstrate again.

Some things will be very different this time. In the old days, the police hated the demonstrators. Honestly, I always had the feeling they were just looking for any excuse to beat us up. Nearly every police force in the 60’s was made up overwhelmingly of white men. The idea of allowing non-white, female people to have equal rights with men like themselves, who represented the pinnacle of human evolution, seemed to strike them as a personal affront.

But my daughter, who participated in the Woman’s March on Washington, tells me that this time, the police were on the marchers’ side. To prove it she sent me a picture of a man with a sign identifying himself as a Muslim being embraced by a (non-white, female) police officer who was wearing a pink pussy-hat pulled over her regulation one. I’m thinking of having it enlarged and framed.

The police have gotten smarter about demonstrations, too; and probably feel safer, which doubtless contributes to their improved attitude toward the crowd. In my day, we used carry glass bottles to drink from, and elevated our signs by attaching them to dowels and yardsticks. Do I need to point out how easily weaponized glass bottles and sticks are? Sometimes the police got so nervous that they confiscated them, leaving thirsty, cranky marchers whose arms ached. If you’ll notice in the picture above, the person carrying the “I’m with her” sign has come up with an ingenious way to calm the nice police officers’ nerves and elevate the sign so that the cameras can see it, too. S/he’s made a tube of an extra piece of poster-board (permitted by the police), cut a slit in the tube, and put the sign in that. This is such a brilliant idea that I wish I’d thought of it myself. Also, water comes in thin plastic bottles now. I’m going to take a couple extra with me on my marches, and if I see a police officer, I’ll offer one.

Other things haven’t changed at all, it appears. If you should happen to take part in a march, keep in mind that no matter what the organizers tell you, there will not be enough porta-potties at the demonstration site. Not half enough. Possibly not even one-tenth as many as are actually needed. Be proud of this—it means you have a good turnout—but be prepared. In the old days, experienced marchers sometimes made a quick stop at the camping-goods store before the march, for what I’ll just call “emergency supplies”. Nowadays I think the old-folks section of the drug-store might have a better selection. I know you get my drift, so I’ll say no more.

If you demonstrate, take snacks to the demonstration. Share them.

Chanting slogans is fine on a march; but singing is much, much better. But in any crowd, there are more people who want to sing than ones who know the words to the songs. In my young days I heard “This Land Is Your Land” sung by both the demonstrators and the counter-demonstrators at the same demonstration, so I made sure to learn the verses as well as the chorus. It hasn’t lost its popularity since I was young.  It was sung by the women in Washington, too.

Also, I noticed early in my marching days that lots of people will join in on songs like “We Shall Not Be Moved” because the only words with which the whole crowd must be familiar are “we shall not be moved”. Verses can be handled solo.  You can keep people singing this one forever, since anybody with half a brain and a cause they believe in can make up a verse on the spot and sing it solo.

Just say it’s a hunch, but I kind of suspect that something—some catchy jingle—with a chorus along the lines of “Super-callous-fragile-ego-Trump-you-are-atrocious” will catch on soon, too.

Although the exact date hasn’t been set, there are going to be Marches for Science in Washington and around the nation soon. I’ll be there, of course. I almost have to be. If you should happen to attend too, let’s meet. I’ll be the one under the “Science, Not Silence” sign, wearing comfortable shoes and a pink pussy-hat; and I’ll be singing: “We’ll take back the Congress! We shall overcome! We’ll take back the White House, too! We shall overcome!”

Also, all the verses of “This Land is Your Land”.

*And please don’t bother to tell me this is justified because, “Obama started it”. I have never subscribed to the notion that two wrongs make a right. As far as I’m concerned, people who believe that former president Obama was wrong to issue so many executive orders have less excuse for supporting those of Trump; not more.