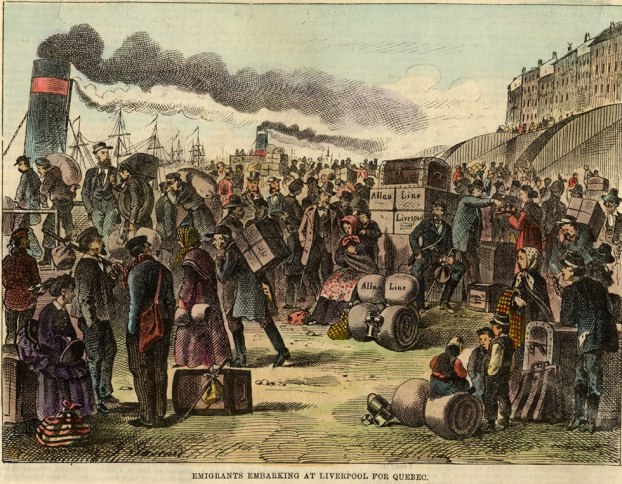 As I’ve said before, family stories are the easiest ones for me to turn into novels. The plot is fixed, the outline pre-written (can’t work without an outline!), and a plausible number and realistic variety of characters already exist, eager to be set in motion. My favorite part is that I don’t even have to think up names for them. I hate coming up with names for characters.

I’ve got a family story in mind right now that I think needs telling—one of those historical fictions that could easily be a multi-volume epic (although at my age I think maybe I’d better aim for something more like a novelette). It’s an old story, but a good one; about how one branch of my family came to this country from Ireland and made good. I think a lot of people would find it very relatable.

The family’s progenitor was the son of poor Catholic farmers—I’ll call him Paddy, since I don’t know his real birth-name—and he left his native land alone, in the midst of the Great Famine. I can’t decide whether or not to get deeply into all the reasons that my Paddy’s family, like so many in Ireland, were utterly dependent on the potato (and specifically on the commercially non-viable variety called the Lumper). The socio-political situation in early nineteenth-century Ireland is absolutely fascinating, but to discuss it might slow the narrative flow.

Putting politics aside, then, I’ll just get on with the story; which is that my progenitor—still Irish, and not yet Irish-American—took advantage of a British government-sponsored subsidized fare to sail to North America.

Naturally, the British government didn’t send Paddy to the United States. Why would they? His ship was bound for Canada, of course—a large, fertile member of the British Commonwealth that needed a larger population to fully exploit its potential to produce and export wheat. Britain needed wheat, and viewed Ireland’s “surplus” population as a convenient means to get it.

A parallel government plan was to undermine the Francophones by planting a lot of English-speakers among them, so Paddy’s ship landed in Quebec.

Unfortunately, in Ireland Paddy had practiced nothing but the spade-culture of the potato. In common with most poor Irish, he knew absolutely nothing about wheat-farming, which generally requires the use of tools like plows, harrows, disks and other mysteries. Therefore, along with most of his young, male shipmates, Paddy took the first opportunity he got of BETRAYING HIS PROMISE to the British government to stay in Canada in return for his fare, and slipping TOTALLY ILLEGALLY over the border into the United States.

(One imagines that the Québécois made no difficulties about this. In fact, they probably pointed Paddy south themselves, and wished him a hearty “bon voyage!”)

Going on with the story, I would then describe young Paddy’s initial struggles in the New World; where, in an atmosphere of hibernophobia and “NINA” (No Irish Need Apply) signs, opportunities were few for displaced Irish potato farmers. But when he got to New York, Paddy modified his accent and his name (to the frustration of his genealogy-minded descendants), and landed a job with the fire department. Soon, he was married (to an Irish-American girl whose lack of any clear trail to the United States suggests that she was also in the country illegally), and had a bunch of children. These children did well; and their grandchildren did even better. Paddy’s adopted name has spread far and wide across the country, into nearly every state, and every trade and profession.

And some of them have now turned Nativist, and cast their votes for the candidate who most stridently vows to deny other would-be immigrants the chances Paddy had.

2 thoughts on “A Story with a Sad Ending”