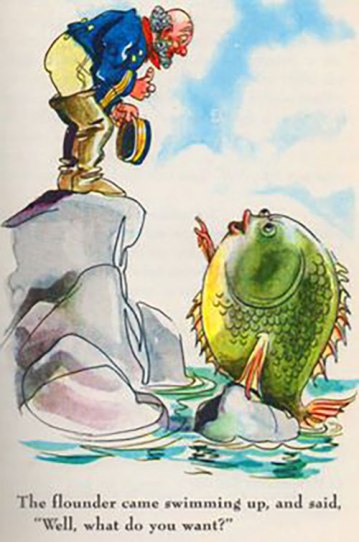 I may have mentioned that I’m no longer young, but believe me, it doesn’t follow that I’m nostalgic for The Good Old Days. Sure, forty years ago I was better-looking. My skin was smoother and I had fewer stomachs and chins. But I also had only my own hands and brain to rely on, whereas now I have robots to do my work, computers to think for me, and Ebay on which to buy back my childhood.

I’m currently waiting, with all the patience of a six-year-old, for a boxed set of books: Grimm’s and Andersen’s Fairy Tales, published in 1945. They’re the versions I grew up with, beautifully illustrated with copperplate engravings, and—possibly because the world seemed an especially harsh place in 1945—honestly and accurately translated from the original languages with no accommodation to a child’s fragile psyche. In 1945, apparently, children’s fragile whatevers were to be hardened up, not accommodated. Sensitive child? Cod-liver oil shots and Grimm’s Cinderella were just what the doctor ordered.

The theme of the Grimm’s Cinderella is basically the same as Disney’s: Abused step-child triumphs. The difference is in the story’s plot details. There’s no fairy-godmother, for one thing. Cindy finds her three ball-gowns (one for each of three successive nights of dancing; even a prince wasn’t expected to pick a wife in only one night) lying on her mother’s grave. Disney either thought a grave was too morbid to mention in a children’s story, or that by leaving open the question of whether Cindy’s mom was absent due to her death or a messy divorce, more children could identify with her. I can see his point. My father died when I was very young, and I had a grave to visit, too. I saw myself every time I looked at the illustration of Cinderella at her mother’s graveside.

I also identified with the fact that she had two older sisters. My own two sisters weren’t step-, and they weren’t (very) evil; but we had our issues. I got a big thrill out of the part of the Grimm story in which in response to their mother’s urging, the step-sisters make their big ugly feet fit Cinderella’s little lost shoe by cutting off their toes and heels. “When you’re queen,” Wicked Step-mother reassures them, “you won’t have to walk anymore.” I was a little disappointed in the prince for being such a dim-wit as to fall for the ruse (twice); but luckily for him, some talking birds nearby alerted him in time to the blood-trails the sister’s mutilated feet were leaving. The talking birds also made sure to peck out the step-sisters eyes once Cindy was happily settled in the castle.

In the Andersen book was the delightful The Girl Who Trod on a Loaf, in which a very vain little girl who bridges a mud-puddle with a perfectly good loaf of bread to avoid soiling her shoes gets sucked straight into a Hell that makes the Biblical lake of fire look like Club Med by comparison (moral: Don’t be vain; also, don’t waste food); and The Red Shoes, in which a vain little girl lies about the color of her shoes to her half-blind benefactress and is danced to death by them (moral: Don’t be vain; also, don’t lie).

Now, those were some stories!

In contrast, my grandson’s current favorite book is one in which Superman uses his various super-powers to determine that Mr. Grocer’s missing bananas were stolen by a gorilla. Superman gets the gorilla to confess to this transgression by assuring him that he (the gorilla) will feel much better once he’s got the whole ugly story off his chest. (The bananas will still be gone, though. No word on who compensates Mr. Grocer for the bananas.) Same basic fairy-tale-type plot, with Superman filling in for fairy godmother; same basic moral set (lying, stealing, and wasting food are bad); but what a difference in the details! I read Grandson this story at bed-time and then we both fall asleep from sheer boredom. I’m not allowed to read him Cinderella, or The Red Shoes. I’m not allowed to read him The Girl Without Hands, in which a father cuts off his daughter’s hands to escape being taken himself by the Devil. But I’m looking forward to re-reading them myself; and who knows? Maybe one day my daughter will change her mind. Maybe one day she’ll reason, “After all, Mother read them as a child; and look how great she turned out.” Maybe one day Grandson himself will figure out that he’s being cheated, and demand better entertainment. Honest: Grimm and Andersen will harden his little psyche right up.

No cod-liver oil for him, though. That stuff’s just plain nasty.